JUST A day after recording one of the best long jump distances in India, Aishwarya Babu returned to the JLN Stadium to break a decade-old triple jump record with 14.14m on the board, at the Inter-State Meet in Chennai. The Karnataka athlete had turned heads with her impressive 6.73m, the best long jump mark on Indian soil since 2005 on Sunday in the qualification round itself.

With the triple jump record sealed, her next target is obvious. “I will go for the long jump record tomorrow,” said the tiny framed athlete, who is just over 5 feet tall and will target Anju Bobby George’s 6.83m. What she lacks in height, she makes up with her pace and explosiveness off the board.

“She is a natural athlete. I am a firm believer in strength and she doesn’t lack there. We have specific training routines that focus on strengthening her lower core,” says coach Sri Aiyappa, who has been training Aishwayra for over two years now. Aishwarya had already made the Commonwealth Games cut in triple jump with a 13.94m leap in a Grand Prix in March. Monday’s effort erased Mayookha Johny’s 14.11m record set in 2011.

As she attempts to rewrite the legendary 6.83m national mark (achieved at the Athens Olympics) on Tuesday, a familiar face will be eagerly watching from the stands. Among her competitors in the final is Shaili Singh who is coached by Anju’s husband Bobby, who led her to India’s lone athletics World Championships medal. Ancy Sojan, who was the season’s leading jumper in India, until Aishwarya eclipsed her 6.55m mark, will also be in the mix.

Coach Aiyappa, who had last evening predicted that Aishwarya would breach the triple jump mark, has absolutely no doubts that his ward will go home with two national records from this meet.

A day after recording a massive 6.73m in long jump, B Aishwarya has set a new national record of 14.14m in triple jump

“I won’t be surprised if she even crosses the 7m mark,” says coach Aiyappa confidently. The reason for his optimism: the pattern: “When she jumps well in triple jump she does well in long jump. Today she has jumped well in triple jump so I am expecting she will have the same energy off the blocks,” says Aiyappa who coached 2010 Asian Games bronze medal-winning heptathlete and his wife Pramila.

Aishwarya’s journey in athletics did not begin with jumps. After training as a sprinter at the junior level, she soon realised her natural pace can be put to better use in jumps. “I took up sport because I had this desire to achieve something in life. I am so glad that my hard work is paying off now,” she said with a broad smile after her victory in triple jump which also happens to be her pet jump. 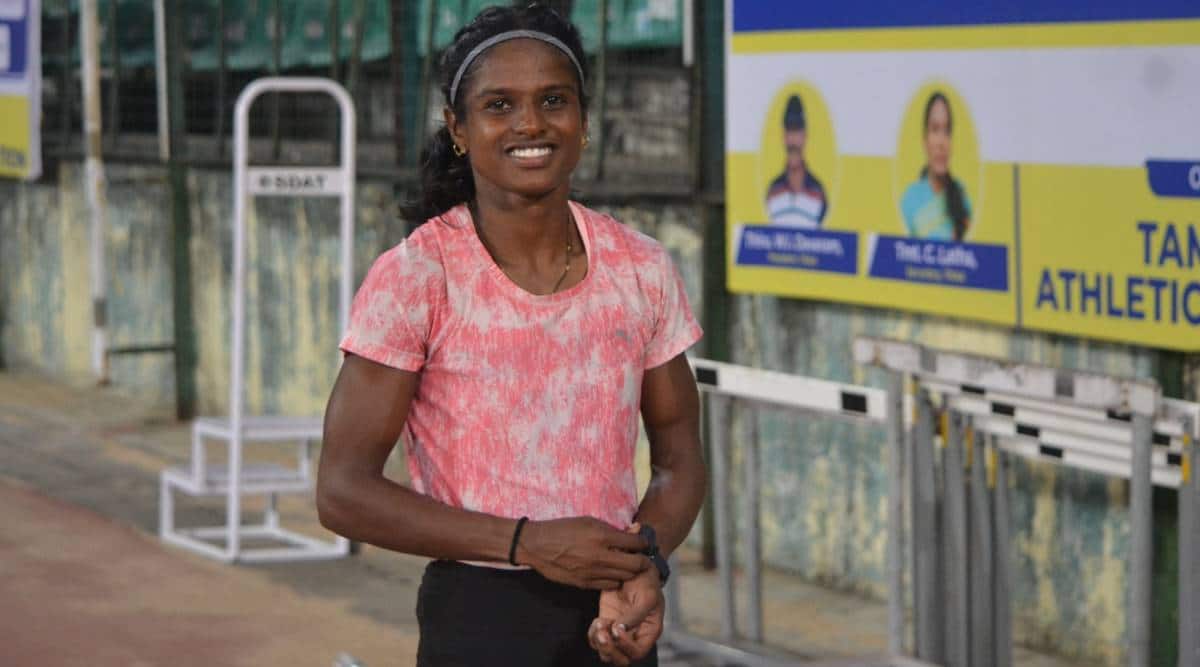 Aishwarya’s journey in athletics did not begin with jumps. (Express Photo by Andrew Amsan)

Aishwarya has had her share of struggles as well. An ACL tear in her knee kept her out of competition for a whole year between 2018-19. When the 24-year-old recorded 13.94m in March the doctor who operated on her, saw the results in the newspapers and was left awestruck. “He couldn’t believe that she recovered so well,” says Aiyappa.

Since Aiyappa is a private coach, gaining access to the Kantireeva stadium in Bengaluru has been a huge struggle, says Aishwarya. “Sir has been writing letters and trying really hard. We have to go travel 30km from central Bengaluru to Vidhyanagar for training every day. It is very difficult but we don’t have a choice,” she says.

India’s most consistent quarter-miler Amoj Jacob limped off the field after pulling his hamstring during the final lap of the mixed relay. He had just taken the lead seconds before the injury forced him to limp off the track. He was later stretchered off. Although there is no official update from the federation over his injury, Amoj later said he fears it could be “a serious injury”. On Sunday, Amoj had won the 400m gold equalling her personal best of 45.68s.