It was a testament to the breakdown of the Senate’s judicial confirmation machinery that the first question posed by many this past week regarding an upcoming Supreme Court vacancy was whether Democrats could install a new justice entirely on their own.

The answer is yes, if the party sticks together. And the prospect of President Joe Biden’s eventual nominee receiving only Democratic votes is hardly far-fetched, given the bitter history of recent confirmation fights for the high court.

Justice Amy Coney Barrett, the last member of the court confirmed by the Senate, did not receive a single Democratic vote. But Republicans held a 53-47 advantage and could afford to lose a colleague or two in ramming through her nomination just before the presidential election in 2020.

With their bare-minimum 50-seat majority, Democrats will not have that luxury after Biden nominates the first Black woman for the court sometime in the next few weeks. Considering the toxic partisan atmosphere surrounding contemporary Supreme Court fights, it is conceivable she could make history not only because of her gender and race, but also as the first person elevated to the court by a tiebreaking vote of the vice president.

It would be a far cry from the simple voice-vote approval of many of her predecessors as recently as the 1960s. Or the 98-0 confirmation of Justice Antonin Scalia, a leading judicial conservative, in 1986. Or even the 87-9 vote in 1994 for Justice Stephen Breyer, a member of the court’s liberal wing, who announced Thursday that he would step down after nearly three decades.

The decline in consensus Supreme Court confirmations has been precipitous, and the escalation of partisan warfare has been sharp.

Deep bitterness lingers over the Democratic assault on Robert Bork in 1987; the routine deployment of filibusters against judicial nominees of both parties beginning during the administration of President George W. Bush; the Republican blockade of Judge Merrick Garland in 2016; the tumultuous confirmation of Justice Brett Kavanaugh in 2018; and the hardball Republican move to rush Barrett onto the court two years later. With the Supreme Court deciding so many of the most polarizing issues of the day — including abortion rights and affirmative action — neither side is willing to cede much ground, and both display their battle scars.

“It is a sad commentary on the nomination process that it has so disintegrated over the years,” said Sen. Susan Collins of Maine, one of the handful of Republicans considered to be in play as potential backers of Biden’s pick. “If you look at the incredibly strong vote by which Stephen Breyer was confirmed, you just don’t see it nowadays.”

Democrats would dearly like to avoid a skin-of-the-teeth party-line vote for whomever Biden puts forward. One of the first calls made by Sen. Dick Durbin, D-Ill., chair of the Judiciary Committee, was to Collins, promising her whatever material and assistance he could provide to help her evaluate the forthcoming nominee.

Democrats also hope the fact that Biden’s pick would replace a liberal justice and not tip the ideological balance of the firmly conservative court — and the fact that she will be an African American woman — will deter Republicans from a scorched-earth campaign when their odds of winning are low.

But although Republicans are promising an open-minded review of the nominee, hard feelings over the earlier confirmation clashes, most recently Kavanaugh’s fight against sexual assault allegations, are never far from the surface.

“Whoever the president nominates will be treated fairly and with the dignity and respect someone of his or her caliber deserves, something not afforded to Justice Kavanaugh and other Republican nominees of the past,” Sen. John Cornyn of Texas, a senior Republican member of the Judiciary Committee, said in response to Breyer’s retirement.

Besides Collins, another Republican who will be the focus of Democratic attention is Sen. Lisa Murkowski of Alaska, a frequent supporter of judicial nominees of Democratic presidents and the only Republican to oppose Kavanaugh.

Murkowski is running for reelection this year under a new ranked-choice voting system back home. She is already opposed by a hard-right conservative vigorously backed by former President Donald Trump, who is furious at Murkowski for voting to convict him at his impeachment trial following the Jan. 6, 2021, attack on the Capitol. Siding with Biden’s choice for the court could help her attract the Democratic and independent voters she could need to prevail under the new election rules in her state.

Sen. Lindsey Graham, R-S.C., a former chair of the Judiciary Committee, has also deferred to Democratic presidents in the past and voted for justices and lower-court judges they put forward. 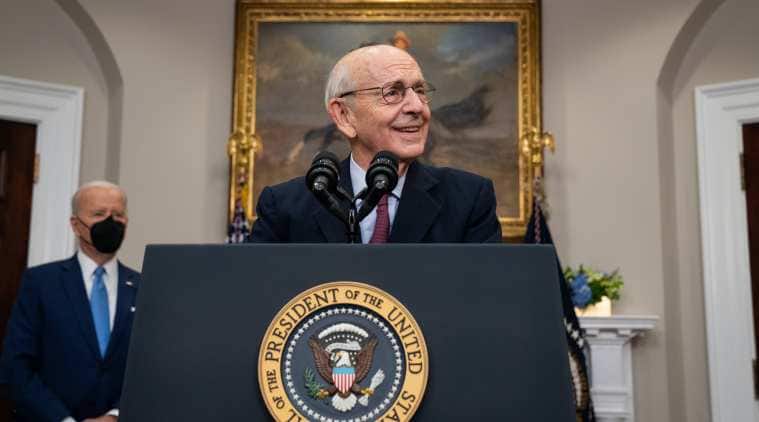 Supreme Court Justice Stephen Breyer gestures while speaking at the White House in Washington on Thursday, Jan. 27, 2022, as President Joe Biden looks on. The battles of the recent past will no doubt extend into the coming fight over President Biden’s choice to replace Justice Breyer. (Sarahbeth Maney/The New York Times)

Last year, Graham, Collins and Murkowski were the only three Republicans to back Judge Ketanji Brown Jackson, a front-runner to succeed Breyer, for a seat on the influential U.S. Court of Appeals for the District of Columbia Circuit.

Supporting someone for a circuit court seat is no guarantee of supporting that same person for the Supreme Court. However, backing someone for the high court after opposing that person for a lower court would be harder to reconcile, making it unlikely that any of the 44 Republicans who opposed Jackson would reverse course and support her now. All were well aware at the time that she was a future high court prospect. Three Republicans were absent.

Biden could also select Judge J. Michelle Childs of U.S. District Court in South Carolina, who has been strongly endorsed by Rep. James Clyburn, a powerful lawmaker from that state and the No. 3 House Democrat. If Biden nominates Childs, his selection could put pressure on Graham and South Carolina’s other Republican senator, Tim Scott, to back her.

But home-state allegiance is no guarantee. Sen. Michael Bennet, D-Colo., opposed the Supreme Court nomination of Justice Neil Gorsuch, a Colorado native, even though the senator introduced him at his confirmation hearing.

Gorsuch’s case is instructive. Though very conservative, he was the sort of highly experienced, pedigreed and qualified candidate a Republican president could have put forward in the past with the expectation that he would receive a strong show of support in the Senate despite ideological differences.

But since Gorsuch was filling the seat held open by the nearly yearlong blockade of Garland and had been nominated by Trump, most Democrats balked. Just three voted for his confirmation. Only one, Sen. Joe Manchin of West Virginia, remains in the Senate; he was also the sole Democrat to vote for Kavanaugh.

Another potential nominee with a Senate voting history is Judge Wilhelmina Wright of U.S. District Court in Minnesota, who was confirmed on a 58-36 vote in 2016. Thirteen Republicans voted for her, and five of them remain in the Senate today, including Sen. Mitch McConnell of Kentucky, the minority leader. But a vote for a district court nominee does not equate to a vote to place a person on the highest court.

Even before the nominee is known, it is clear the outcome in the Senate is most likely to be highly partisan, with the candidate receiving a few Republican votes at best — and perhaps none at all. For a country torn apart by partisanship and a court struggling with its image and credibility, that is far from an ideal outcome.

“I really think it would be harmful to the country to have a repeat of what we saw with the last two nominees being so narrowly confirmed,” Collins said. “I just don’t think that is good for the country, nor the court.”