There is something awkwardly unsettling about the juxtaposition of images that break the chain of causality, when one moment or expression leads to another without any logical connection being established. The conflation of images gives rise to a sense of forced hybridity, for instance when the French poet Charles Baudelaire writes: “Toi qui, comme un coup de couteau, /Dans mon coeur plaintif es entrée” (“You who, like a knife blade, /Have penetrated my plaintive heart”). Or in the famous dream sequence in Alfred Hitchcock’s Spellbound where free-floating eyes transform into painted curtains, which are shredded by a man with scissors; a scene succeeded by a game of cards and a man without a face.

Spellbound, starring Ingrid Bergman as a psychiatrist, capitalised on the rise of pop psychology in America in the light of the growing public interest in the work of German psychoanalyst Sigmund Freud. For its dream sequence, Hitchcock had roped in Spanish artist Salvador Dalí who had become synonymous with the surrealist movement that gained prominence in the early part of the 20th century.

Born in the aftermath of World War I, surrealism was an artistic and literary movement that had a firm focus on channeling the unconscious to unlock the power of imagination. In a departure from the post-enlightenment logic of absolute rationalism and realism, surrealist art was illogical, absurdist and at times even unnerving as it thrived on biomorphic and dream-like imagery. 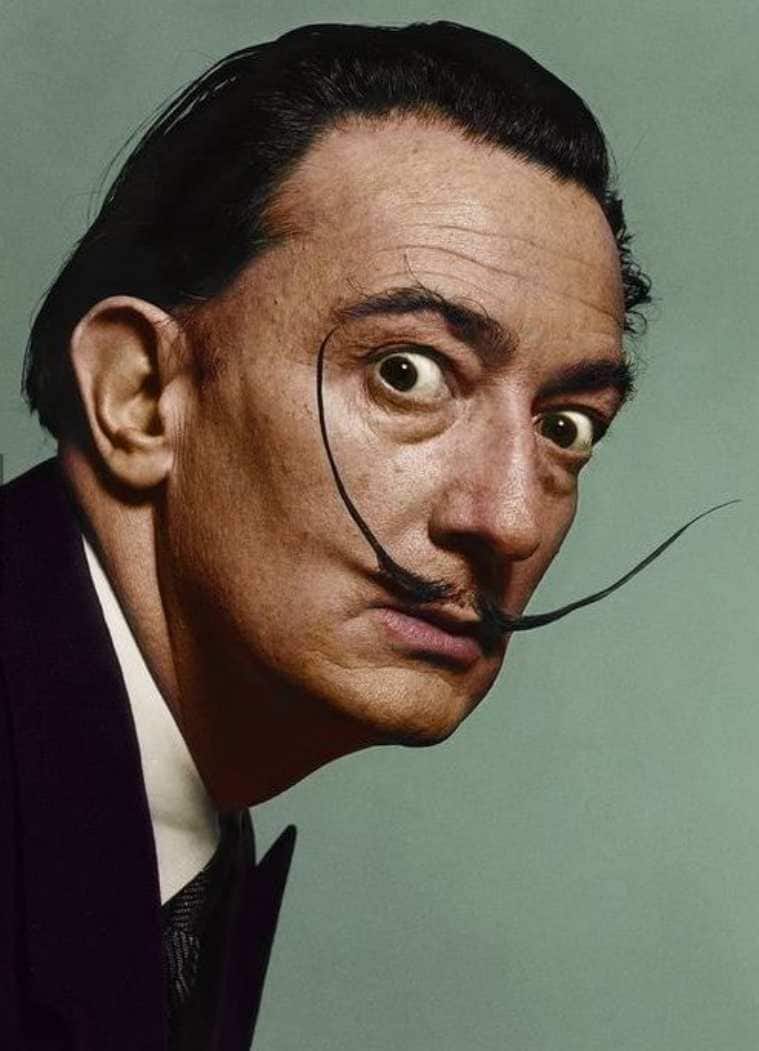 Salvador Dalí became synonymous with the surrealist movement that gained prominence in the early part of the 20th century. (Pintrest)

The sequence from Spellbound in a way typifies the excesses of the surrealist movement—each image alluring as it provokes a sense of fear and desire, capturing the fragility of each moment as the next person or object makes an illogical and forced intervention. The montage becomes a visual hybrid of what Umberto Eco may call “oneiric images”.

Like most surrealists, a sense of forced displacement that causes shock was important for Dalí’s art. In 1959, Hallmark approached him, paying an advance of $15,000 for submitting images for greetings cards. Dalí ultimately submitted 10 images for Christmas cards, but most of them were considered to be too unsettling to be put into production.

By the late 1940s, Hallmark had started using paintings of contemporary artists on their Christmas cards. “So, through the ‘unsophisticated art’ of greeting cards, the world’s greatest masters were shown to millions of people who might otherwise not have been exposed to them,” company founder Joyce Clyde Hall wrote in his autobiography.

By the time Hallmark approached Dalí, it had used the art of Pablo Picasso, Paul Cezanne, Paul Gauguin, Vincent Van Gogh and Georgia O’Keeffe on their Christmas cards. But Dalí’s surrealist renditions of the Christmas tree and the Holy Family were considered to be too dangerous or avant-garde at that time—of the 10 images he submitted, only two were finally put into production.

The ones that were rejected included images of a headless angel playing a lute, a Christmas tree made of butterflies and a representation of three wise men riding camels.

Even the two images which were selected—‘The Nativity’ and ‘Madonna and Child’—had the ebullient excesses that embodied Dalí’s style. They marked a radical departure from depictions of the nativity scene or Madonna in high Renaissance art. The difference in Dalí’s imagery is stark when compared alongside the magical transcendence embodied in a painting like ‘The Mystical Nativity’ by Renaissance master Sandro Botticelli. 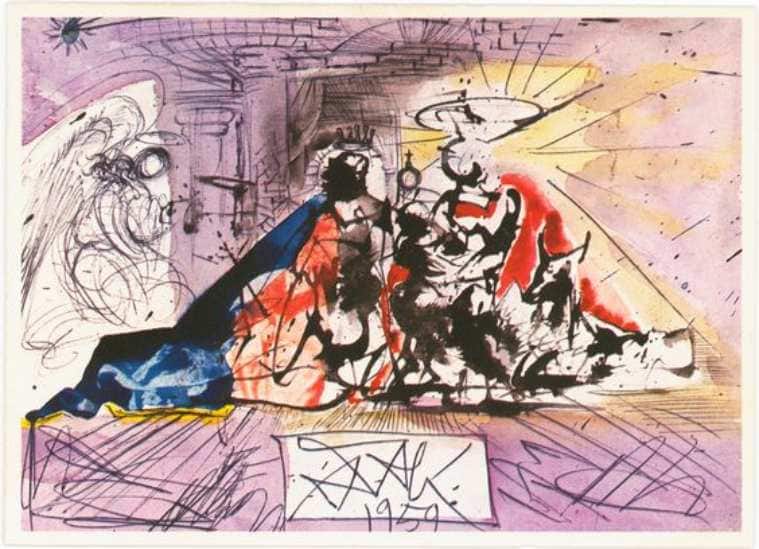 If Botticelli’s depiction elevates the senses to a state of spiritual transcendence, Dalí’s art is marked by the spirit of irreverence that reduces the nativity scene to the mundaneness of everyday life.

The surrealists looked down upon high art as a form of bourgeois individualism. They focused on the everydayness of existence even as they deployed a stylised technique which was divorced from rationality and logic. In choosing their imagery, the focus remained firmly on, what André Breton in his 1924 Surrealist manifesto calls, “psychic automatism”, which is to be exercised “in the absence of any control exercised by reason, exempt from any aesthetic concerns”. This free play of images, with the objective of giving an unbridled reign to the unconscious, was supposed to produce images which lacked logical explanations and causal connections, resulting in a sense of shock and awe.

The forced juxtaposition of images produced this effect even in surrealist poetry. For example, in Breton’s ‘Free Union’ (1931), he writes: “My wife with her figure of an otter between the tiger’s teeth…My wife with temples the slate of a hothouse roof/With eyebrows the edge of a swallow’s nest…My wife with wooden eyes always under the axe…”

This penchant for using images to produce a sense of shock was also a hallmark of the Dadaist movement which many believe sowed the seeds of surrealism. A notorious moment that became a high point of the movement was in 1917 when Marcel Duchamp submitted a men’s urinal—playfully signed ‘R. Mutt’and titled Fountain—for the New York Society of Independent Artists exhibition. Much like his other paintings, Dalí’s art for the Christmas cards was considered too obtuse and outrageous during his time. For all his obsession with ants and molten clocks, his art was subsumed by the metaphoric potential of images.

American artist Andy Warhol drew a series of blotted line Christmas cards in the 1950s. The “pope of pop”, as he came to be known, designed some of these for Tiffany’s and even featured in a couple of Christmas card catalogues for the Museum of Modern Art.

But these are among his least remembered works. Unimpressed with his efforts, one of his clients in the 1950s reportedly remarked: “He gave us a whole series of little funny drawings for Christmas—they were his original drawings, little sketches of an angel, or a cat all bright red—but hardly anything was suitable for Christmas. They weren’t very appealing.”

But among the works that brought him fame were Warhol’s paintings with Christian imagery. He drew the Monalisa series in 1963 by using silkscreen—a stenciling technique for surface printing which was developed in the 1900s—to duplicate Leonardo da Vinci’s famous painting. This was followed by the ‘Jackie’ series which rendered Jackie Kennedy as a figure out of a pietà modelled after Michelangelo’s creation. Warhol, who lived openly as a gay man, through his works in the series, particularly ‘Be a Somebody with a Body’, tried to address the homophobic biases and controversies surrounding AIDS. (Pintrest)

In the 1980s, Warhol spent time working on his ‘Modern Madonna’ series for which he asked mothers to sit while they nursed their babies. He was subsequently offered a million dollars by art dealer Alexander Iolas to produce his ‘Last Supper’ series.

Despite the overtly Christian imagery in this series, through his art he also tried to send out a message to fundamentalist Protestant evangelists and Roman Catholic bishops who denounced gay life. Warhol, who lived openly as a gay man, through his works in the series, particularly ‘Be a Somebody with a Body’, tried to address the homophobic biases and controversies surrounding AIDS which were dominating headlines at that time.

Long before the quirky experimentation by the modernists, the Victorians’ taste for the macabre played out in the form of weird artwork on their Christmas cards. This was an age when Santa Claus had not been commercialised and Hallmark was not yet established.

It was only in 1881 that cartoonist Thomas Nast (Baghsaw) represented Santa Claus in a form which we would recognise today. The representation in Harper’s Weekly went on to become a recurring concept on Christmas cards.

Before that, animals, flowers and foliage along with seasonal greetings were very common. But using bizarre representations, which by modern standards could be considered inappropriate for the purpose of cheering up spirits, were also in vogue. Among the disturbing Christmas cards which were popular back then are the ones with images of dead birds, murderous frogs and children being boiled. 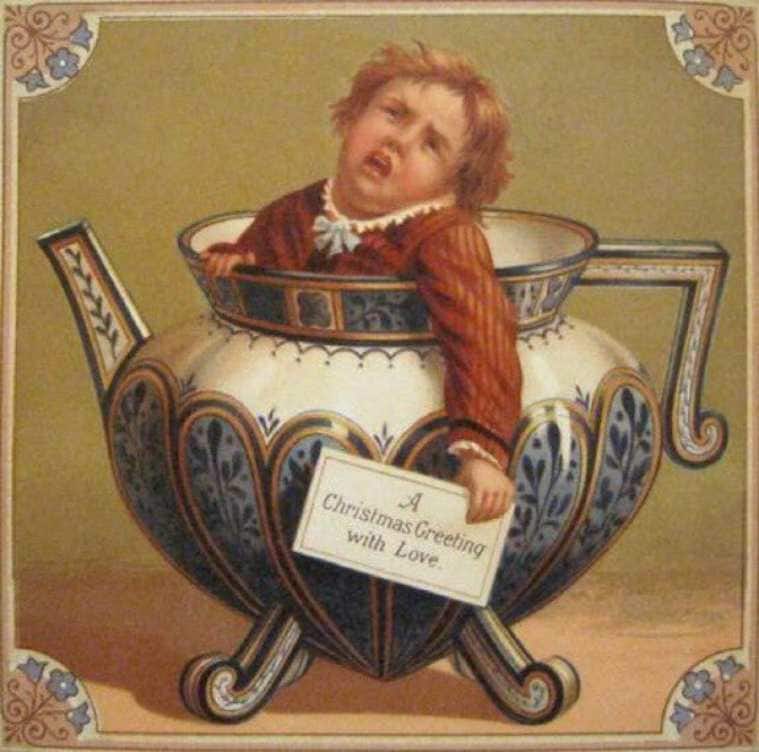 A wide range of animals and birds were used in the artwork but there was a common recurring theme of death. Many experts have attributed this to the low life expectancy and high mortality rate during harsh winters in the Victorian era.

Many of the images were nightmarish. Coloured sketches of rosy-faced children spreading cheer would be tempered with a turnip wearing a hat, dead robins, glum-faced animals and sinister food items leaping out. Amid the spirit of Christmas cheer, there was a ubiquitous and omnipresent feeling of dark foreboding and death. At the same time, the practice of using Christmas imagery in the form of Jesus Christ, angels, crosses, sheep and carols on Christmas cards was extremely popular. T.H.S. Escott in Social Transformations of the Victorian Age writes: “The Victorian age is in fact above all others an age of religious revival”. Indeed, some historians like Owen Chadwick note that the clergy became more zealous from the middle of the 1850s, they “conducted worship more reverently, knew their people better, understood a little more theology, said more prayers, celebrated sacraments more frequently, studied the Bible, preached shorter sermons.”

From redemptive to radical

The propensity to experiment with the bizarre, often perhaps to explore the redemptive and radical potential of art, has endured the test of time. Centuries after the Victorians used images of dead birds and long after the headless angel of Dalí, the most recent “Christmas cards” to have provoked curiosity and condemnation in equal measure are by street artist Banksy.

Among the controversial Christmas graffiti by Banksy is a representation of the nativity scene in which Joseph and Mary are blocked from reaching Bethlehem by the Israeli West Bank barrier. The painting has been around till 2005 but had gone viral on social media recently following a renewed escalation of the Israel-Palestine conflict.

A few years ago, Birmingham residents discovered a reindeer wall graffiti which was widely considered to be the work of Banksy. Subsequently, the artist himself shared on Instagram the video of a homeless man lying down on a bench behind which the graffiti is visible on the wall. As “I’ll Be Home for Christmas” played on in the background, Banksy’s subversion of the figure of Santa—imagined here not as a deliverer but a common man rendered powerless by the forces of global capital—is both poignant and powerful.

In 2020, a Banksy “Christmas card”, which showed Raymond Briggs’s famous snowman bending over another while smoking a fag, sold for nearly £4,000 in London.

Many of Banksy’s “Christmas cards” had been first exhibited at popup galleries in the early 2000s. These exhibitions at centres around London and once in Palestine were usually sold out affairs.

As a popular anecdote goes, the street artist had once just entered one of his exhibitions at a Santa’s Ghetto in London in 2003 only to find the police asking a staff member if Banksy was there. “I’m sorry I can’t help. I don’t know who Banksy is,” the staff member reportedly lied. And Banksy, while looking at the paintings just like any other connoisseur of art, calmly walked out.