Actor Mouni Roy and Suraj Nambiar tied the knot on January 27 in Goa, following the Malayali and Bengali traditions. The couple have been keeping fans hooked to social media with photos and videos from the wedding festivities. On Sunday, the couple returned to Mumbai and shared videos as they had certain post-wedding ceremonies.

While Mouni was dressed in a red Benarsi saree, Suraj was seen in an off-white kurta-pyjama. Both were deeply engrossed in a post-wedding ceremony where the bride and groom are supposed to find a ring in a pot of milky water. Mouni defeated Suraj with her friends commenting that her shopping spree was confirmed as spoils of winning the game. The couple later spent the night partying with their friends at home.

Mouni Roy also shared several photos and videos from the sangeet, as well as the after-party on her Instagram story, which included giving close hugs to her Naagin co-star Arjun Bijlani. In one of the videos that she shared, she hugged him and called him her ‘best friend’, to which he responded, ‘God bless you darling.’ In another video, she enjoys a dance with Arjun’s wife in a room, while holding a dog as well.

Mouni posted photos of hot chocolate and marshmallows as well as other delicious food that they enjoyed at the party. 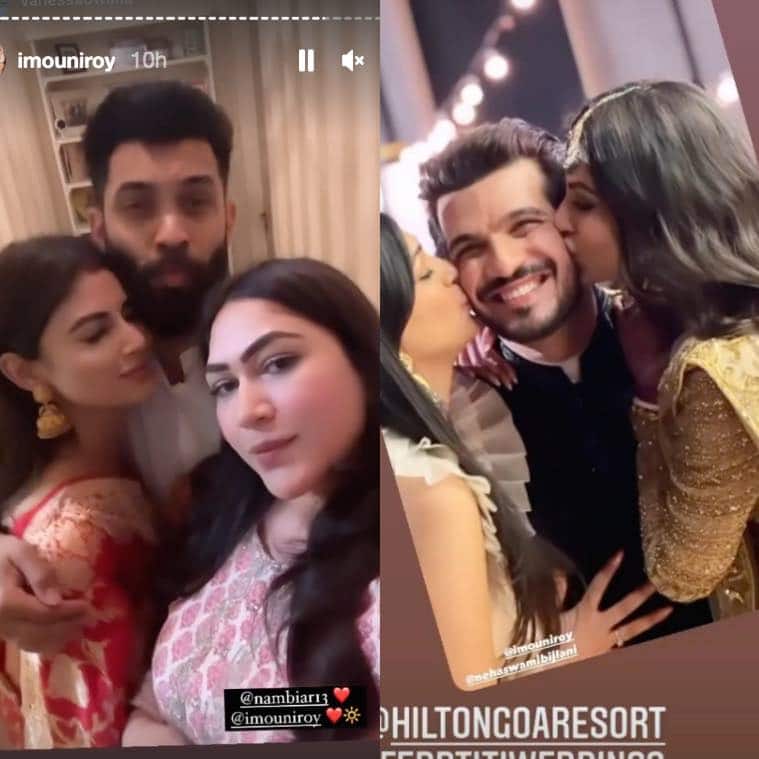 Mouni also posted the videos of the griha pravesh ceremony.

See all videos and photos of her griha pravesh, as well as the party