PSEB Punjab Board 10th Result 2022: Self study and following a time table are what the three PSEB Class 10 Board toppers cite as the mantra for their success. This year, girls have bagged all the top three positions in the Class 10 Board results released Tuesday.

Fifteen-year-old Nancy Rani, a resident of village Satiye Wala in Ferozepur, Punjab stood first. She scored 644 out of 650 marks and hence secured 99.08 per cent. Nancy, whose father is a carpenter, plans to be an engineer. 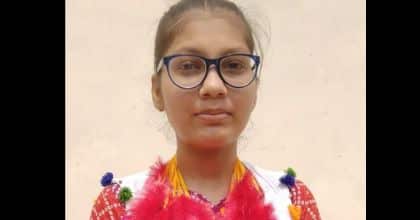 Nancy Rani is the topper with 644/650 marks. She belongs to Satiye Wala village.

“Now that I have topped the state board exam, I want to go to the government meritorious school which is 10 km away from my village. I can’t afford to study in a private school, but rural and government schools can also produce toppers.. one needs to see this.” Nancy says she didn’t take tuitions to prepare for the Board exams. She did self study with the help of her teachers’ guidance, she said. She opted to be taught in English in school.

Nancy’s elder brother Sahil is in Class 12 and is studying Science. “I was sure that Nancy would do something and she has made this border village proud,” he said. Sahil is also a bright student and he had scored 100 per cent in Class 10. Speaking about his performance in Class 10 he said, “that was Corona year in 2020 and final board exams did not take place..it was based on past performance. However, positions were not announced that year.”

Ram Krishan, her father who works at a carpenter’s shop in Ferozepur city said,” I am a Class 6 dropout and my wife studied till matric (Class 10) ..so we had a dream to make our children study…” Nancy’s village is about 13 kilometres from the Indo-Pak border. Her younger brother is in class 8.

A farmer’s daughter from village Natt of Sangrur district in Punjab, Dilpreet Kaur came second in the Board results. Although she scored the same as Nancy, she was ranked second since she is older than Nancy. The Punjab board uses the age criteria as a tie-breaker. Her father Rabbi Singh told The Indian Express, “she is also the topper..age karke second kita hai ..par number taan 99.08 per cent aaye ne.. bhot mehnat kiti hai bachi ne (she is also the topper, because of age she was placed at number 2 but her score was 99.08 per cent. She worked really hard).” 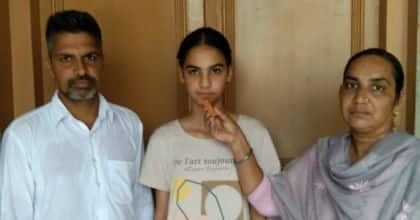 Although she scored the same as Nancy, she was ranked second since she is older than Nancy.

Rabbi has about six acres of farm land and taken another 10 acres on lease and hence is considered a medium farmer in the area. Rabbi discontinued his studies after class 12 and took up farming. “My elder daughter has gone to Australia on a student visa; she was a commerce student. But Dilpreet wants to be a doctor. She will be taking the medical stream. She never took tuitions but was regular in her studies. She always used to get up at 3 am for studies and was in bed by 10 pm,” he said.

Dilpreet is a student of a private school, Guru Tegh Bahadur Public Senior Secondary School, in village Kanjla. However, her family now plans to enroll her for coaching and in the city school of Sangrur. “Toppers can come from villages too, without any coaching,” Dilpreet said as she ate ladoos.

Komalpreet Kaur, again a farmer’s daughter of village Ghodenav village of Sangrur district in Punjab, stood third in the state. She studied in a private school — Bhutal Public Senior Secondary School in Bhutal Kalan village — and had been a topper since class 2. Her father Tarsem Singh has about eight acres of farm land. Gurjant Singh, Chairman of the school said, “Our school has got a state topper for the very first time. I went to her village to congratulate her. She was a bright student and I was sure that she would earn laurels for this district.” Komalpreet too has plans to study medical stream in class 11 and plans to enroll herself in a city school with science. “Covid period had made us very lethargic but my self study and a time table continued, which made me work hard and stay regular in studies. I took English medium option for studies and computer science was my additional subject,” She said. Komalpreet got 642/650 marks which is 98.77 per cent.