Dharmendra was once known as the ‘He-man’ of Indian cinema and given the number of action roles that he has done on screen, he is often associated with that persona to this date. Playing the ‘jat yamla pagla deewana’ in films like Pratigya, and the many screen outings he had with his wife Hema Malini, Dharmendra was often slotted in the box of an action hero, who loved with all his heart, and could flex those comedy muscles when required. But before the Sholay star made it in the big league, his true potential as an actor was discovered by director Hrishikesh Mukherjee.

In a 1998 interview with Filmfare, Hrishikesh Mukherjee was asked that since he had once called Dharmendra his favourite hero, if he still sticks to that. To this, the famed director said, “By favourite actor, I didn’t mean just his acting talent. I meant the human being also. I cast Dharmendra as a professor in Chupke Chupke. He was also in Satyakam, the most satisfying film I’ve made.” Dharmendra and Hrishikesh Mukherjee collaborated on Satyakam, Majhli Didi, Anupama, Guddi and Chupke Chupke. Of these, Chupke Chupke has possibly become one of his most famous films – considering the number of times it has been broadcast on satellite television but the director’s most “satisfying film” Satyakam, was Dharmendra’s most actualised performance on screen.

Satyakam is often labelled as Dharmendra’s most underrated yet most nuanced work in Hindi cinema. For the uninitiated, Satyakam is the story of a man who believes that his morality cannot be compromised, no matter the hindrances in his way. His ideals often face the reality checks of real life, but his Satyapriya Acharya always chooses the path that is righteous, no matter the consequences. He turns a blind eye when a woman is raped, but this incident shakes him to the core and he then starts questioning his idea of life. He has been brought up in a gurukul with his grandfather who has instilled the ideas of living a morally righteous life but as Satyakam moves on, the filmmaker explains that absolute morality can be achieved living in isolation but when faced with the moral conundrums of living in a structured society, choosing right over wrong isn’t always black or white.

Dharmendra intricately portrayed a character who is the torchbearer of truth but has started to realise that making decisions that are morally upright on paper, aren’t always the right decisions. In the scene where Satyapriya is bedridden with a terminal disease, and finally decides to commit the ‘one sin’ of his life, his dilemma is evident. His eyes brimming with tears, and his last attempt to do something right, serves as a strong reminder of the time where the idea of building a perfect society, in the post-independence era, had disintegrated.

Dharmendra and Hrishikesh Mukherjee collaborated together in Anupama, Majhli Didi and Guddi as well. All three of these films had female protagonists but Dharmendra played characters who were integral to the protagonist’s journey. In Anupama, he played Uma’s (Sharmila Tagore) confidante who supports her through her emotional crisis and builds her confidence enough so she can stand up against her father. In Guddi, he plays a fictional version of himself and helps Guddi (Jaya Bachchan) in realising that there is a dark side to the glamorous world of films. Her infatuation with Dharmendra’s on-screen image is such that Guddi believes it to be his real-life persona but his character directs her to find happiness that’s away from the reel life. In Majhli Didi, Dharmendra plays the husband of Hema (Meena Kumari), who marries her against his family’s wishes but stops offering her any kind of support after his opinions clash against hers.

Chupke Chupke – the film that is now known as their most popular collaboration, Hrishikesh Mukherjee brought the best out of Dharmendra as he got him to play a professor who disguises himself as a driver at his in-law’s house. In an ensemble that also starred Amitabh Bachchan, Jaya Bachchan, Sharmila Tagore, Asrani, Om Prakash among many others, Dharmendra was at his most charming self. 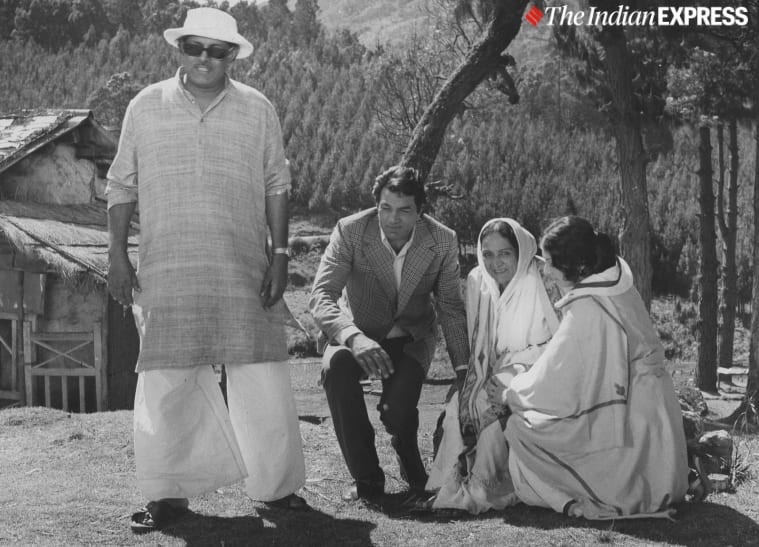 Dharmendra has had a long and glorious career where he has been celebrated for his action avatar and while the actor has made an unforgettable mark in that space, his delicate performances in Hrishikesh Mukherjee’s films offer a glimpse into the actor who was probably cast more on the basis of his looks, rather than his acting caliber.

At 86, Dharmendra is still seen frequently on television as he graces various reality shows as a guest. His upcoming films include Rocky Aur Rani Ki Prem Kahaani and Apne 2.